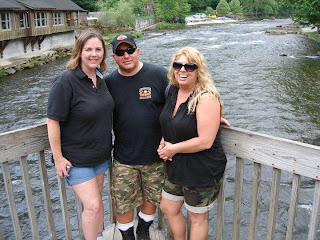 The three amigos, Tim, Boots, and I had a two hour break after our zip line tour. We decided to walk around the area near Wildwater Rafting where our ride downstream would take place. The view of the river was amazing. We stopped off to take a few pictures next to the river. "That water sure looks cold", said my husband. Boots agreed. I raised an eyebrow. "How does water *look* cold?" I asked flatly. "I don't know, said my husband, but it does". Again my friend agreed.


We watched as several kayaks and canoes floated down stream while enjoying a beer on a picnic bench. Before the beer I was consuming was even half empty, I realized I had forgotten my pack with all my stuff in it. In a rush, I went searching for it, never to finish my poor, over priced beer. I did find my pack (thanks to honest tourists) and we made our way to the rafting site. 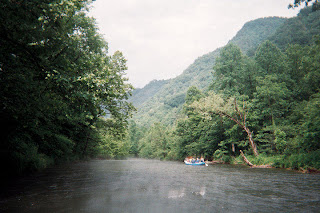 Wildwater is a rafting business nestled in the side of a mountain along side the Nantahala River in Bryson City, NC. We arrived there a few minutes early, got checked in and waited for the van ride to the drop-off point where we would board our rubber rafts. The clouds were moving in quickly and when we did get into the van the rain started to pour down like never before. The three of us agreed that we would certainly be washed away, never to see dry land again. The van climbed the mountain road until we came to an abrupt stop. Traffic was backed up and was not moving. I silently rejoiced in the fact that it was giving the rain time to ease up... which it did. It was just sprinkling a bit when we were dropped off at the boat launch area. 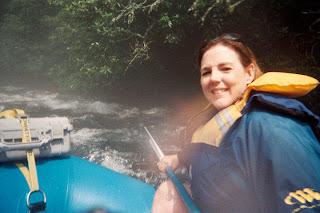 We were introduced to our guide, and given instructions on what to do. We carried the raft across tons of gravel to the river (my ankle was still aching terribly from the sprain I had suffered and then re-injured during the zip line. I did drop my end of the raft twice :P (sorry guys). 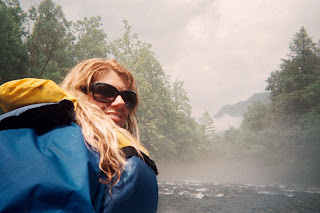 With Boots and I positioned at the front of the raft and Tim and our guide at the rear, we began floating down the river, paddling, resting, chatting. At the very first rapid, the raft tossed upward then dove in bow-first. A huge wall of water crashed down on the two of us ladies that were given the "privilege" of sitting in the front of the boat. The water, which was only 48 degrees, completely engulfed me and I screamed out in shock. It definitely woke me up. 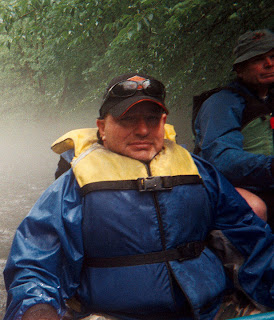 We went over a few more rapids, enjoyed the mountain scenery, and took in the mountain air (and water) for a little over two hours. The scenery was breathtaking. There was a fog that hovered over the surface of the river and a mist of clouds embraced the blue-gray tops of the mountains. The majestic green trees bowed over the clear river, and the sound of the rapids filled the otherwise quiet air. 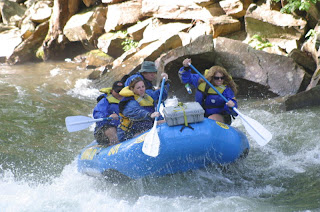 The last rapid we descended was the most fun, but ended our trip down the Nantahala River. I was soaked to the bone, cold, and waterlogged, but at the same time I had a great first time experience with whitewater rafting. I'm definitely ready to go with Boots to a river she has braved with much bigger, stronger rapids. I just hope the water there doesn't *look* as cold as the Nantahala.
Posted by Diana of Windmasters Hill at 8:44 AM