My best girlfriend Boots said to me a few months back, "Go skydiving with me". I smiled and told her that it was something I had always wanted to do. My husband and I had been to Las Vegas several times and I had actually called about pricing for a tandem jump. When the voice on the other end of the phone cheerfully said "300 dollars", I said "Thank you" and promptly hung up the phone. I told my husband I couldn't see spending $300 dollars on something that would only last a few minutes when we could see "Sigfried and Roy" or "Mystere" twice for that. 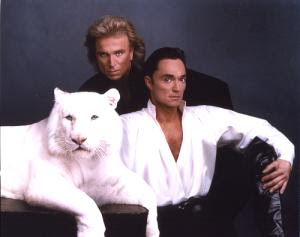 "Its a life changing experience", she assured me. I mulled over this "life changing experience" and decided that she was exaggerating. I would jump from an airplane, experience free fall, float down to earth, and when I got back on my feet my life would just pick up where I left off. Nothing will have changed after a skydive. My same old job would still be waiting for me. My same old home would still need to be cleaned. My husband and dog would still need to be fed. How life changing could this really be? After a bit of coaxing (I still couldn't see paying that kind of money), I decided to go along with it. 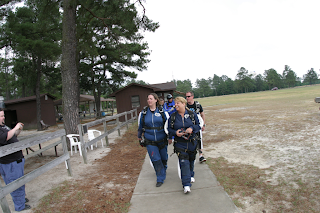 Fast forward to May 16, 2010. My friend, Boots made reservations for us at Raeford Parachute Center and I found myself suited up in a gawd-awful looking blue jumpsuit, a less than flattering padded "helmet", and a harness that made my body crimp and fold in all the wrong places. I was, however, going to be attached to a real cutie of a tandem instructor :P 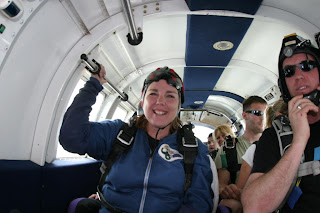 The flight up was long. It took us three solid weeks to get to altitude. Well, not really. It took maybe 15 minutes but it did seem like three weeks. I was so excited I could barely stop grinning. That, combined with the uber-ugly jumpsuit made for some really goofy looking pictures. I watched out of the open door of the plane as the earth slowly moved farther and farther away. I anticipated what the initial drop would feel like. I wondered how the long, steady free fall would make me feel. I wondered what terminal velocity would actually be like. Then, I wondered if I was normal, as I hadn't yet been nervous. 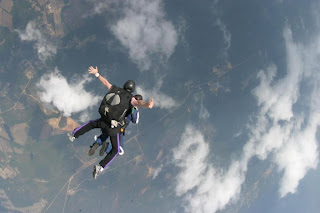 The tandem instructor hooked me up to him and tightened down all the connections. I was attached to him tighter than I had expected to be. It was a really secure feeling. He then instructed me to position the two of us in front of the open door. This is the first and only time I actually got nervous. I'm naturally clumsy, and could see myself slipping and causing the two of us to fall out of the plane before he was ready. Then, I realized that although it wouldn't be the ideal way to go out of the plane, that is where we were going to end up anyway. I slowly and carefully positioned us in front of the door. "Are you ready?" he asked. "I'm ready", I said with a grin. He bent forward and we tumbled out of the plane into the clouds. 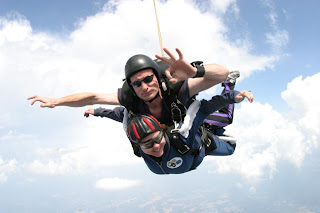 The first few seconds I was disoriented, but quickly found myself facing the earth. He tapped me on my shoulder, which was my signal that I could open my arms out and experience the free fall in the correct position. This didn't feel like falling. It didn't feel as if I was in danger. All I felt was wind and total freedom. I screamed out "WHOOOooOOOOOOo" to the top of my lungs. I decided during free fall that this was the most awesome thing I had ever experienced in my life. 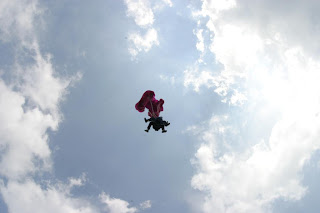 When the chute opened there was an amazingly relaxing silence. I felt myself glide and soar in the sky. It was peaceful and relaxing. The instructor told me to grab the yellow straps he was holding and proceeded to show me how to speed up our decent, how to slow it down, and showed me how to steer left and right. I was actually maneuvering the parachute on my own! As I pulled down on the right strap, the chute angled and turned right. I pulled down on the left strap and we turned the opposite direction. I was actually flying; soaring like an eagle. 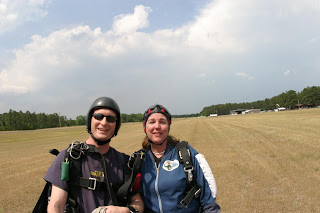 The drift down lasted maybe five minutes and we landed back on the ground. The second I stood up, all I could think was "I wanna do that again"! I was so excited, I was pumped up, I was full of adrenaline. I had actually loved doing what I had put off for so many years and regretted not doing it sooner. The $300 is a very small price to pay for such an amazing experience.

I made that jump one month ago. Since my feet hit the ground after that jump, I have wanted to experience so many other things I wouldn't have been willing to do before. I want to go hang gliding. I want to go scuba diving. I want to go kite surfing. I want to... well, you get the idea. Skydiving really IS a life changing experience.
Posted by Diana of Windmasters Hill at 11:50 AM