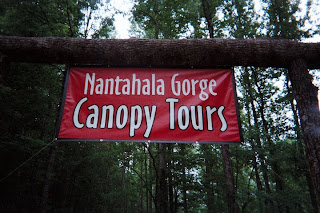 My husband Tim and I were wanting a short getaway this past weekend. He called me from work and asked me to google the Nantahala River in North Carolina and look into whitewater rafting. I immediately pulled up my trusty search engine and within minutes was on the Nantahala River Rafting site. I looked around a bit and found the whitewater rafting but was sidetracked by something unusual. There was a link to a zipline canopy tour in the area. I texted Tim back to call me when he got a free miunute. I had found another adventure!

We set up reservations on Wednesday and I called up my friend Boots. This was something that she hadn't experienced yet either. She was up for the challenge and on Friday afternoon after work the three of us made our way to Bryson City, North Carolina. 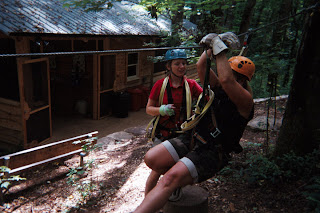 We arrived at Nantahala Gorge Canopy Tours and were given all the necessary equipment: a harness with a pulley system, a hard hat, and some heavy leather gloves. When we were all dressed and ready to go, our guides took us out to the practice lines to instruct us on safety and technique. I was actually suprised the briefing lasted MUCH longer than the briefing we got when we went skydiving. The waiver form we had to sign was much much shorter though as Boots pointed out. 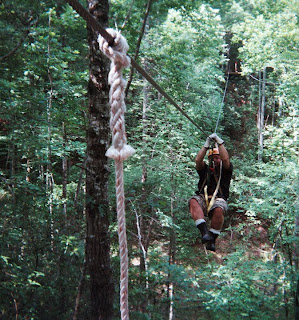 The lines ran from tree to tree onto platforms as high as 70 feet in the air. In total there were 11 ziplines, the longest of which was a little over 600 feet long, 6 rope bridges, and 3 small transfer bridges. Some of the bridges had planks missing and there were no rails to hold to. There were only rope supports for the bridge and the cable that ran down the middle. The course covered 3/4 of a mile and the tour lasted a little over two hours.

The transfer bridges were what I worried about the most. I had sprained my ankle two nights before while taking the dog out. One of the requirements was that you were in good health and had no casts of any kind, hard or soft. I had been using a gel cast the day before just to stand. I wasn't afforded that luxury on this trip. I had to hide my injury and did so with the help of Boots' injinuity. She suggested I duct tape my ankle and cover said injury with a sock. Everything went well though and I was able to complete the course with the exception of one zipline and one bridge before I rolled my ankle again. I was in a bit of pain but wasn't able to let anyone know as we were all in tight proximity. 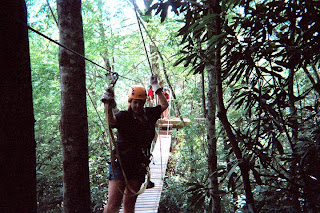 As I crossed the last (long) bridge, I made my footing slow and sure. I had gotten half way across the bridge when Tim stepped onto the planks behind me and began to bounce, unaware that I had been injured again. Still not able to give away my injury, I turned and yelled "stop it!". I think he (and the rest of the tour) thought I had gotten freaked out at the bridge. It worked out well though. He did stop and I made it to the other side of the bridge without incident. 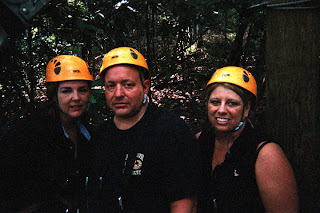 We all zipped safely to the last platform, and posed for a group picture that our guide, Dion, graciously snapped for us. From left to right... Me, My husband Tim, and my friend Boots.

We were now off to the next adventure of the day... Whitewater Rafting. Post to come.
Posted by Diana of Windmasters Hill at 8:35 PM